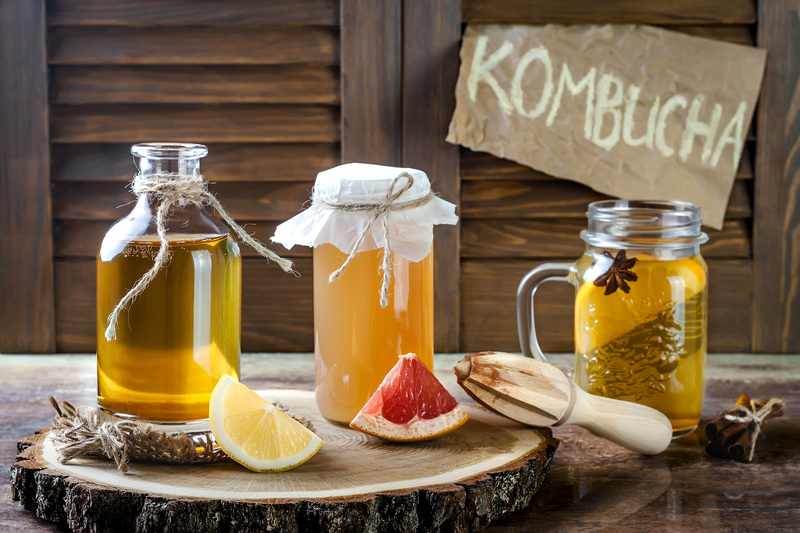 Kombucha is an ancient concoction that is currently becoming well-known and very popular. This fizzy, tangy drink has an extensive history and has been long cherished for its healing properties. Originating in China around 220 B.C.,  kombucha was discovered by, and thus named after, Dr. Kombu who brought the drink to Japan to serve to the ailing emperor. In the early 20th century, as a result of trade route expansions, the fermented tea was brought to Europe and eventually to the U.S.

Unfortunately, kombucha may cause some problems and may not be the healthiest option for some people.  As the drink becomes more and more popular, more controversies arise. Our Loop and River North Nutritionist, Sue Smith, LDN, is sharing some top controversies on the drink!

Below are five possible reasons you may want to rethink kombucha as your beverage of choice.

In 2010, the production of GT’s brand kombucha was halted for 2 months following a bottle audit at the Whole Foods store in Portland, Maine. Not only were some of the bottles leaking but the alcohol content came into question. It was found that the bottles contained slightly over 0.5% to over 2.5% alcohol, well above the Alcohol and Tobacco Tax and Trade Bureau’s regulation. This regulation states that non-alcoholic beverages contain less than 0.5% ABV. The concern was that children would have access to it and have alcohol in their system and use it to become “buzzed”.

Manufacturers are now more conscious of the alcohol content but the drink still contains a small amount. By law, the definition of a non-alcoholic beverage is less than 0.5% by volume. Some manufactures have a warning on their bottles which reads, “Should not consume if avoiding alcohol due to pregnancy, allergies, sensitivities or religious beliefs”. Kombucha is considered a non-alcoholic beverage but know that it does contain a small amount.

Although many people enjoy the taste of kombucha, it is not a low-calorie beverage. Some kinds of kombucha can have up to 120 calories per serving. That is almost as many calories as a 12 oz. can of regular Coke!  Consuming an occasional kombucha won’t cause significant weight gain but drinking it daily may contribute to excess calorie consumption. People who frequently drink it are more likely to be overweight or obese than those who don’t. The bottles can be deceiving because a typical bottle contains 2 servings so you may be consuming more calories than you realize.

Not only is kombucha a higher-calories beverage but it also can have a high sugar content. The sugar is necessary for the fermentation process and “feeds” the yeast and bacteria. Some kombuchas may contain 28 grams of sugar, the equivalent of 7 teaspoons. Excessive intake of sugar has an increased risk of diabetes, obesity, fatty liver and heart disease. Look for products that contain less than 4 grams of sugar per serving to keep your sugar intake to a minimum but remember, the typical bottle contains 2 servings so if you drink the whole bottle, you need to double the grams of sugar.

May Cause GI distress

Kombucha is known to benefit digestive health because it contains probiotics which help populate your GI tract with healthy bacteria. Depending on the person, however, drinking it may contribute to GI side effects. One reason is that it is carbonated and too much CO2 can lead to bloating and excess gas. Not only is kombucha carbonated, it contains FODMAPs which are fermentable carbohydrates that can lead to GI distress, especially those with IBS. Additionally, drinking a large amount of kombucha can lead to excess sugar intake, which may cause diarrhea by drawing water into your intestines. If you experience any adverse symptoms when consuming kombucha, it is advised that you discontinue it and avoid any future consumption.

Another issue with kombucha is that it may be dangerous for certain people and can cause serious health issues. Kombucha is unpasteurized and contains a mixture of different bacteria and yeast. Consuming high amounts of these microscopic organisms can lead to an overgrowth in the GI tract and can contribute to infections in certain people. Due to this reason, those who should avoid drinking kombucha are those with a weakened immune system, people with cancer, kidney disease or HIV. There have also been reports of severe allergic reactions, acidosis and liver complications due to potentially contaminated kombucha.

Kombucha is typically made using black or green tea, both of which contain small amounts of caffeine. Some brands actually add additional caffeine besides what is found naturally in the tea. Those who are sensitive to caffeine may become anxious or jittery from consuming too much. Due to the caffeine content, kombucha may also cause sleep disruptions if consumed close to bedtime.

Drinking kombucha is typically safe for most people but it is best to limit your intake due to the high calorie and sugar content. It is best to limit your consumption to two 8 ounce servings per day (16 ounces total) avoiding it before bedtime or if you have any immune deficiency or GI issues. You want to choose a high-quality, lower calorie, low sugar product with no more than 50 calories and less than 4 grams of sugar per serving.  Kombucha should be stored in dark glass containers to help protect the probiotics from light damage and be refrigerated at all times, even before opening.

Kombucha can contribute to your overall health due to it’s rich source of probiotics and antioxidants but it may not be for everyone. Before deciding if kombucha is the right beverage for you, consult with one of our Functional Medicine Providers. Functional Medicine can help you get to the root cause of your health concerns with diet and lifestyle changes. Click the button below to schedule your first appointment.

Sue Sue Smith, MS LDN, is a licensed dietitian nutritionist with a passion for healing through proper diet, nutrition and lifestyle. She earned a Master’s degree in Human Nutrition from the University of Bridgeport in Connecticut. Previously, she received a B.S. from Benedictine University in Lisle, IL with a major in biology and a minor in secondary education. She has worked at several clinics doing nutritional counseling throughout the western suburbs of Chicago.